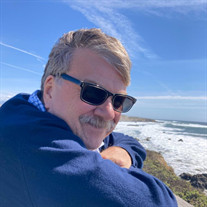 BARRY CHARLES MILLARD 2/15/1956 - 10/15/2021 Barry Charles Millard was born on February 15, 1956 in Kingston, England, the first child of Ernest and Thelma. In 1967, when aged 11, the family moved to Riverside, California, when his father became employed by ROHR Industries. Barry graduated in 1973 from the first class at La Sierra High School. In his youth he worked at Squires Restaurant, drove a Pontiac GTO, and later a Mediterranean Blue Chevy Vega (affectionately dubbed the Bad Bazmobile). In 1976, while attending Riverside Community College, he met Jan Buchwald, the love of his life. They first became doubles partners in badminton, but in 1977 they were married in Las Vegas. True Love. In 1978 Barry was hired by ROHR Industries and began a lifelong career in aerospace. Like his father, he was passionate about the business. He worked for 42 years at what eventually became Goodrich, then United Technologies Collins Aerospace and finally Raytheon. His name was known worldwide. When there was a situation, they sent in Millard. He was the ultimate problem solver, everybody’s Go-To guy. Daughter Jessica was born in 1986. Dad was always proud to watch her singing or acting in a play. He taught her everything about tools and cars. They shared a love of auto racing, and (of course) airplanes. In 2018 she gave him his greatest joy in life, grandson Brayden. Barry and Jan loved to see live music, and their favorite band of all time was Tower of Power. They had special places they called home away from home; Phoenix, Maui, Muir and Stinson Beaches, Morro Bay, Coronado, British Columbia, Seattle. Barry enjoyed dining at Backstreet, Shakespeare’s Pub, Ancho’s, JT’s Diner, the Taco Station, Little Green Onions for breakfast and D’Caesaro Pizza (where he ate lunch with his coworker Ralph almost every day). Aside from cars, trains or planes, Barry enjoyed reading (not always speaking) about politics, weather formations, earthquake tracking, British newspapers, the MGA, Steve McQueen, the BSR Jazz station, Star Trek (especially Next Generation, which he watched daily), the Great British Baking Show, All Creatures Great and Small, Northern Exposure, and any movie with Kim Novak or Claudette Colbert. Barry was a phenomenal cook, and was forever surprising people with his creations. His steak and mushroom pie, mince, shortbread, and applesauce will be missed by all. Barry left this stratosphere on October 15, 2021. He is survived by Jan, his wife of 44 years, daughter Jessica, grandson Brayden (the little man, his best friend). Brother Chris and wife Jeannie, sister Carol, father-in-law Frank Buchwald, sister-in-law Cathy, brother-in-law Jim, 4 nephews, 3 nieces, and his family at Collins Aerospace. Barry was preceded in death by his parents Ernest and Thelma, mother-in-law Velia Buchwald, and his beloved dogs Max and Kai. The next time you see an object in flight, think of Barry, who now has unlimited wings.

The family of Barry Charles Millard created this Life Tributes page to make it easy to share your memories.

Send flowers to the Millard family.