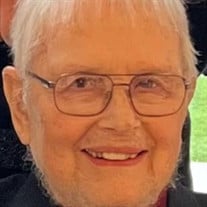 Carl Paul Cardey was born on April 16, 1933 in Takoma Park, MD. He passed away in Hemet CA on February 27, 2022 at the age of 88. Carl was the eldest of two children born to Paul C. Cardey and Irene Winifred Sypher. Carl enlisted in the US Army in the early 1950’s, and served at a base in Washington state. In his professional career, Carl spent 20+ years as a 7th grade Science teacher at both Jurupa Jr. High School and Mission Middle School. After his retirement, Carl focused on serving his community by volunteering in various roles at the Hemet-Sunset chapter of Rotary International, He also pursued an interest in Genealogy and in recent years, became very involved in his church group. Carl’s lifelong sense of adventure was fulfilled by his many interests including automobile racing, motorcycle riding, genealogy searches across the USA, with stops at Museums, Battle Fields, Racetracks, etc. In the early years many trips were taken on 2 wheels on his motorcycle. His love for speed was enhanced by a brief racing hobby which included a Nascar race at Riverside Raceway in the mid 1960’s. In his later years, his wheelchair never limited his ability to get out and see the world including trips to London, France, Daytona, Washington DC. just to name a few. In the midst of these adventures, Carl always made time to support the many activities of his extended family members. Carl is survived by three children Laura, Paul (Paula) and Steve, four grandchildren Danica (Chris), Jillian, Lance and Trevor (Colleen), and one great-grandchild Raelyn. Carl is also survived by his brother Jim (Joyce) as well as a niece Brenda (Mike) and a nephew David (Danita) and their families. And most importantly, he is survived by the many friends he has made on his journey through life. Carl will be buried with Military Honors at Riverside National Cemetery in a private ceremony. The family is hosting a Memorial Service and Celebration of Life gathering on April 5, 2022 at 4pm, in the Clubhouse at: The Lakes at Hemet West 5001 W. Florida Ave. Hemet CA 92545. All who knew Carl are welcome to attend. Flowers can be sent to The Lakes at Hemet West- Attn: Clubhouse for Carl Cardey Memorial Service (on the day of the event) Donations in his memory can be made to the Alma Brooks Memorial Scholarship Fund via the Hemet-Sunset Rotary chapter at https://greatnonprofits.org/org/alma-brook-memorial-scholarship-fund

Carl Paul Cardey was born on April 16, 1933 in Takoma Park, MD. He passed away in Hemet CA on February 27, 2022 at the age of 88. Carl was the eldest of two children born to Paul C. Cardey and Irene Winifred Sypher. Carl enlisted in the US Army... View Obituary & Service Information

The family of Carl Paul Cardey created this Life Tributes page to make it easy to share your memories.

Send flowers to the Cardey family.