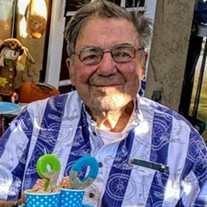 In the geodesic dome home he built, under hospice care and with his family, Darrell passed peacefully in the early morning of Saturday, January 22, 2022. Darrell was born November 4, 1931 in Long Beach, CA. An unusual native Californian, Darrell was the eldest of four sons who grew up in semi-rural Compton. They enjoyed many boyhood adventures especially ice skating, hockey, and Boy Scouts with their father Gilbert. Darrell was drafted into the United States Navy in 1955 and served until 1959. Fortunately, there were no active U.S. military engagements at the time and he did not see combat. He was stationed in Honolulu, HI and served as the secretary to the Chaplain. It was an enjoyable time of his life - he first learned to sail and used his musical skills to play organ in local churches and provide accompaniment to musical theatre productions. At an early age, he was encouraged by his mother, Dura, to take up the piano and became an adept pianist. He then studied music education at the University of Southern California (USC), graduating in 1964 with a Master’s Degree. He became a music teacher for the Morongo Unified School District, traveling to all the schools. Then became the music teacher at the Twenty-Nine Palms junior and high schools. He then took a position of music professor at Siskiyou Community College in Weed, CA. In 1968 he joined Riverside Community College (RCC) because they had state-of-the-art piano learning equipment. He rose to become the Chair of the Music Department and worked for RCC until 1993, when he took early retirement. Darrell taught piano and music theory, and became the primary pianist for the Department’s many musical theatre productions. After official retirement, he continued to teach part-time in-person and online classes through RCC. Darrell also played piano in a dance band that played gigs throughout the year and all over Southern California. Music was an essential part of his life - in recent years, he attended many Jazz Festivals throughout Southern California. Although he wasn’t much interested in watching sports, he was an avid athlete. He continued his enthusiasm for ice skating and hockey into his 30s. He owned a small plane (called “The Flying Saussers”), which he used to commute between Twenty-Nine Palms and USC. He loved to ski and took many backpacking trips into the Grand Canyon into his late ‘60s. His most recent passion was cycling - the last 18-mile bike ride he took was in early November 2021. Above all, he loved the water. First it was salmon fishing on the Klamath River for decades and recreational boating in San Diego. Then he became enamored with sailing, first on the Arethusa - a boat he rebuilt himself. His most recent vessel was the Escapade, which he customized for racing and cruising. He attempted an around-the-world sail in the ‘90s but ended up shipwrecked on Tahiti after a rogue wave pulled the boat off its mooring. He competed in the Newport-Ensenada race many years, most recently in 2021. Sailing, joining and leading many boating clubs became his second career. He served on the Bridge of the Arrowhead Power Squadron, a boating safety and education group. Since the ‘80s he has been an active member and boating educator. He held the post of Commodore and many other leadership positions with Seal Beach, Hollywood, Little Ships, and Marina Yacht Clubs (yacht clubs for the non-rich). Darrell was an innovator in many ways. He constructed a property in Woodcrest with a geodesic dome home, a barn to house his daughters’ horses, sheep, rabbits, chickens, and ducks, and a cut-your-own Christmas tree farm. He bought a cement sailboat hull and built what became Arethusa. In the music sphere, he was an early adopter of electronic music, purchasing a Moog synthesizer and composing original music. He had a zest for learning throughout his life and building things from scratch with his own hands. Darrell made friends wherever he went and loved nothing better than a good party. The family is so grateful that we held a milestone birthday party to celebrate his 90th birthday on Nov. 21, 2021. With his friends and family he joked, told stories, ate Mexican food, and drank wine on the patio of the home he built, on the land he nurtured, and with the people he loved. Darrell is survived by his wife Barbara Sausser and his daughters Amy Sausser and her husband Jerry Soto, and Anne Sausser and her husband Robert Al-Shamma; as well as his brothers Don Sausser and Dale Sausser. He leaves behind one grandchild, Oliver Al-Shamma. Darrell is preceded in death by his daughter Alicia Re Gensel and brother Duane Sausser. .The celebration of Darrell’s life will be held March 28, 2022. The service will be held at 12 noon at the Riverside National Cemetery at 22495 Van Buren Blvd., Riverside, CA 92518. Following will be a Celebration of Life from 1-4 pm at the California Citrus State Historic Park, Sunkist Centre, 9400 Dufferin Ave, Riverside, CA 92503. All are invited. Masks will be required for all indoor activities. We prefer you are vaccinated and boosted, or have tested negative within 24 hours of the service.

In the geodesic dome home he built, under hospice care and with his family, Darrell passed peacefully in the early morning of Saturday, January 22, 2022. Darrell was born November 4, 1931 in Long Beach, CA. An unusual native Californian, Darrell... View Obituary & Service Information

The family of Darrell Arthur Sausser created this Life Tributes page to make it easy to share your memories.

In the geodesic dome home he built, under hospice care and with...

Send flowers to the Sausser family.