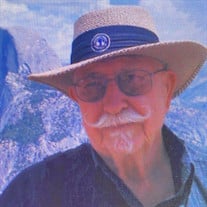 Dick D. Lansman Jan. 3, 1939 – Oct. 13, 2021 Dick Lansman, 82, beloved husband, father, uncle, grandfather, and friend, died Wednesday, Oct. 13, of complications related to COVID-19. He had been hospitalized at St. Jude Medical Center in Fullerton, CA, and was being treated for COVID-19-related pneumonia and other symptoms. Dick is most remembered for the way he made those around him laugh and feel instantly comfortable – as if they had known him for years. His distinguished, white handlebar mustache became his signature, and he would often adorn it with tiny bells for special occasions, such as Christmas or weddings. He loved the Lord and boldly shared Jesus Christ with those around him, and he never met a person he was unwilling to help. Philippians 2:3-4 Dick met his bride, Mary Lynne, a physical education teacher, at a church singles’ group in 1971. After service, he offered to walk Mary Lynne to her car, and she agreed. They shared a big laugh that became fodder for family jokes when she stopped in front of his shiny new Jaguar and declared, “This is my car!” The two would go on to marry following a whirlwind romance just months later at Pomona First Baptist Church in Pomona, CA. They shared a love of old cars, camping, horses, family, and church, and built a life together surrounded by people who loved them. They settled in Yorba Linda, CA, in the upstairs living space of the Yorba Linda Hardware Store on Main Street after spending two years in Pomona. A couple of years later, they purchased a house in the same town and would call that address home for the rest of their marriage, decorating it with Western gear and equestrian décor. As the years passed, the horse-loving pair gained small-town notoriety for driving their horse-and-buggy around local streets. It was from that same home that Dick, a machinist who worked for various companies including Nissan Racing, Toyota Racing Division, and Stewart-Davis, would set-up “shop” in the garage and establish Lansman Machine, his namesake business. He could make anything in that shop, so skilled was he with math, precision, creativity, and a “can-do” personality. On the shop walls hung notes and jokes the Iowa native had collected from friends and newspapers throughout the years, along with tools and gadgets he had gathered from yard sales and junk yards. Dick was a collector – and a “fixer.” He wouldn’t stop until a job was not just “done,” but done well. “Tomorrow never comes,” he would say, scoffing at the idea of postponing what needed to be done. He was always working on a vehicle, tearing-apart and rebuilding engines and brakes, clad only in his jean shorts, straw hat, and hankie. Never far, Mary Lynne would keep his plastic cup filled with ice and sun tea and call him in for lunch and supper. Even when the retiree and youngest of five children born to Harry and Leta Lansman did take a break, he was busy. He regularly attended church, car shows, helped others, and strolled around his neighborhood with his wife, often bringing in others’ trash cans. He loved entertaining his family, particularly his grandchildren and great grandchildren, with homemade ice cream and drives around the block in his mini Model-T. Dick also loved to travel with his family to their favorite destination, Yosemite National Park. All along the way, he was busy talking and making jokes, and pointing at things, causing Mary Lynne to worry they may drive off the road. He loved being in Yosemite and busied himself there preparing food in the Dutch oven, popping popcorn over the fire (his favorite snack), pumping-up flattened bicycle tires, and inflating rafts. He enjoyed floating in the rafts down the Merced River and simultaneously teasing Mary Lynne as she attempted to keep her hair dry. He also enjoyed riding his bike with family to Yosemite Village and Curry Village for ice cream or pizza, and riding the tram, and he often lamented the end of Yosemite’s Fire Fall. Even in Yosemite, far from home, he would make new “old friends.” He may have brought more joy to Yosemite than Yosemite brought to him. Dick is survived by his wife of more than 50-years, Mary Lynne Lansman of Yorba Linda, as well as four daughters, sons-in-law, 12 grandchildren, and six great-grandchildren. Dick, a joyful former member of the United States Air Force who served during the Korean War, will be laid to rest at Riverside National Cemetery in Riverside, CA. A GoFundMe account has been created for those who wish to contribute to Dick’s funeral and memorial. Visit GoFundMe.com and search for “Dick Lansman Funeral & Memorial” under “Search.”

The family of Dick D. Lansman created this Life Tributes page to make it easy to share your memories.

Send flowers to the Lansman family.