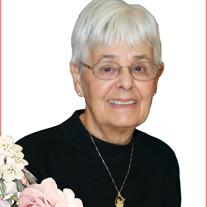 Dolores “Dee” (Gomez) Ramirez, age 91, died at home Sunday, May 16, 2021, in Rancho Cucamonga, California. She was born April 28, 1930 in Los Angeles, California, to Antonio and Ana (Gerola) Gomez. She graduated from Lincoln High School in Los Angeles in 1949. On June 16, 1951 she married Frank Galvan Ramirez, and was married to him for 60 years, until his death in 2011. Dee was a dedicated homemaker, a lifelong active member of the Roman Catholic Church, a talented artist, who was devoted to her family. She is survived by seven children, Mary Ann Hodge, Frank (Jennie) Ramirez, Vivian (Tom) Imbruglia, Victoria (Vince) Gobel, Tim Ramirez, Tom (Carol) Ramirez, and Dee Marie (Miguel) Gonzalez, as well as 28 grandchildren and 35 great-grandchildren. In addition to her husband she was preceded in death by her parents, a brother, four sisters, two sons, Peter and Michael, son-in-law Jonathan Hodge, and grandson Peregrine. Rosary will be held Monday, July 12, at 10:00 AM followed by an 11:00 AM Funeral Mass with a reception immediately following, at St. Peter & St. Paul Catholic Church in Rancho Cucamonga, California. Burial will take place the following day, Tuesday, July 13, at 10:00 AM, at Arlington Cemetery in Riverside, California. In lieu of flowers the family requests donations be made in her name to the Carmelite Sisters of The Most Sacred Heart in Alhambra CA. www.carmelitesistersocd.com

The family of Dolores Ramirez created this Life Tributes page to make it easy to share your memories.

Send flowers to the Ramirez family.