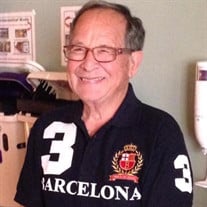 Henry Castillo Flores born in Puente Grande, Jalisco Mexico and was 87 years old at the time of his passing. He was born October 24, 1933 and died March 8, 2021 in Oceanside, CA from heart failure. He completed most of his education in Mexico and finished up in night school in Los Angeles, CA. He served in the Army from May 5, 1953 through May 5, 1955 and was appointed Corporal. He transferred to the Army Reserves for a short time. Henry married Emma Luz Velez on November 24, 1956 in Los Angeles. He was an upholsterer for most of his life in the Los Angeles area and finished his career at Ethan Allen in Chino, CA as a furniture repairman. He retired after 45 years at the age of 65. He lived in Los Angeles, Pico Rivera, Whittier and then moved to Apple Valley and lived there for 33 years until he moved to Oceanside about 4 months ago. He played soccer for many years where he made many life long friendships. He was born and raised Catholic and attended the Catholic Church almost every Sunday until he could no longer drive. Henry was a kind, gentle soul with an easy, sly smile and was well liked by all who knew him. He was preceded in death by his parents Jesus Flores Sanchez and Juana Castillo. He is survived by his two older sisters Maria Antonia Beltran (93) and Beatriz Bedoy (91). He is also survived by his wife Emma Luz Flores (84), his 5 children: daughters Susie Flores (63), Patty Flores (62), his son Marc Flores (61), daughter Diana Flores (59), and son Henry Flores (58). His 11 grandchildren: Marcos Anthony Flores (38), Anthony Jorge Ybarra (37), Kyle John McHugh (36), Adrian Edward Flores (36), Brittany Marie Lucero (35), Danielle Kristina McHugh (34), Bryce Matthew Flores (33), Morganne Marie Flores (24), Maddison Marie Flores (22), Brijene Chole Flores (16), Aidan Pearson Flores (12). His 9 great grandchildren: Stone John Lucero (9), Damon Anthony Flores (8), Costa Dane Lucero (7), Juliet Alicia Ybarra (6), Kain Matthew Flores (6), Mia Elliot Flores (5), Sunny Titus Lucero (3), Diego Anthony Ybarra (2), Miles Odin Flores (2).

Henry Castillo Flores born in Puente Grande, Jalisco Mexico and was 87 years old at the time of his passing. He was born October 24, 1933 and died March 8, 2021 in Oceanside, CA from heart failure. He completed most of his education in Mexico... View Obituary & Service Information

The family of Henry C. Flores created this Life Tributes page to make it easy to share your memories.

Send flowers to the Flores family.