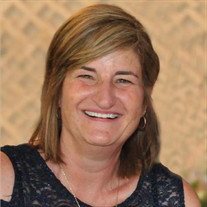 Ilene Alberdine Seaton of Riverside, CA passed away surrounded by loved ones on November 16th, 2021 after a 4-year battle with Frontotemporal dementia. Ilene was born to father Eeuwout (Ed) and mother Maria Christina (Mieke) Hoogendijk in Willemstad Curacao on October 30th, 1963. She and her family moved from Curacao to Bermuda in 1972, to the Netherlands in 1973 and to Norco, CA in 1974. Ilene graduated from Norco High School in 1981 and went on to achieve a degree in Comparative Literature from University of California in Riverside on June 15, 1985. After graduating, Ilene worked as a computer programmer and analyst for several years. Ilene married her high-school sweetheart Thomas Dwain Seaton on June 16, 1984, at Crossroads Christian Church in Corona, Ca. She and her husband had three children. Their first child Thomas was born February 21, 1987. Their second child Erika was born on April 12, 1989 and their third child Christina was born on December 20, 1994. When Ilene had Erika, she decided to dedicate her life to being a fantastic mother. Ilene excelled at supporting her family through the many passions, difficulties, and aspirations of their lives. Whether that was supporting Tom in his career or helping her children in school, other activities or general life lessons. Ilene was passionate about her family and friends and focused much of her time on helping them improve their lives. Ilene was predeceased by her father. She is survived by her husband Tom, her three children Thomas, Erika, and Christina, her two grandchildren John and Analise, her mother Mieke, her brother Eeuwout and her sister Marie-Christine. Services for Ilene will be held on December 6th, 2021 at 1pm at Arlington Mortuary at 9645 Magnolia ave. Riverside, 92503. In lieu of flowers, please consider a donation in Ilene’s name to The Bluefield Project (bluefieldproject.org)

The family of Ilene A. Seaton created this Life Tributes page to make it easy to share your memories.

Send flowers to the Seaton family.