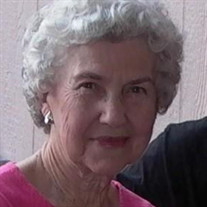 We lost a loving, genuine, beautiful soul on January 23, 2022, when Joan Elizabeth (Wise) Marangio died peacefully and passed to the arms of Our Lord and His Mother. Born in 1930 in Minneapolis, Minnesota, the daughter of the late Frank and Agatha Wise, predeceased by her beloved sister, Arlene (Reynold) Brown, and dear brother Al (Eleanor), she is survived by her caring and treasured sister Jean (Dan) Nierengarten. At 17 years old, she left the mid-west farm life to make her way to California where she met the true love and soul mate of her long and happy life, Flammarion (Flarry) Marangio. They met over 70 years ago in Los Angeles while members of two neighboring CYO groups. They married in 1952 at Sacred Heart Church in Los Angeles, the city where they set up their first home. After two years the orange groves in Ontario beckoned and they built a house next to Flarry’s parents, the late Alfredo and Carmella Marangio. Flarry became a firefighter and together they raised six happy and cherished daughters: Laura, Mary, Gianine (Gina), dear predeceased Carrie, Dianne and Joanne (Jodi). Long before working from home was ‘a thing,’ Joan trailblazed that path. In 1962, she and Flarry founded FM Chemical Co., a fire protection products company, which she managed from the dining room of the house that she helped build. While her girls were school age, she was home each day when they returned from St. Joe’s, Pomona Catholic or St. Lucy’s. She took a break, had a snack, and watched her show, General Hospital, while her daughters gathered around, just happy to be at her feet before the homework called. For many years, along with Flarry, the off-duty firemen from stations around Ontario and Upland worked out of the FM Chemical ‘shop’ - what most would call a garage. Daily morning coffee sitting around the kitchen table - mutual respect, care for the workers – vivid memories of a mother who treated everyone as though they were the most important person, friend, or employee in the room. As much as Joan loved her girls, there was always more of that love to go around as she became the honored mother-in-law to Mike Brummel, Doug Hanks, Joe Piscioneri, Billy Prendergast and Ray Mansfield. She loved and delighted in each of her sons-in-law as though they were her own these many years. After retirement from FM Chemical Co. in the 80s, and working alongside Flarry in various other ventures, including volunteer work at His Hands Food Pantry, and contracting with California Forestry Service, the couple began to travel. While home and hearth truly made them happy – discovering more of the U.S. and other countries by air, land, or especially by sea, became their passion. Often traveling with relatives and friends from New York, Florida or the group from the old neighborhood in Los Angeles, they took every opportunity to share that common affinity for meeting new people, and seeing new sights, and bringing home stories that made them (and their audience) laugh till the tears ran. Joan was dear “Mimi,” “Granny Jo,” or “Nonna” to her 11 grandchildren: Jared, Paul, Chad, Jeff, Amelia, Richard, Leanne, Amanda, Ryan, Mary Beth and Domenick, and their families, including 13 great grandchildren. She will be missed by her many nieces, nephews, family and friends. In recent years, as Joan’s health declined, the family was blessed to find Asher Estate, a place with kind, capable and skilled caregivers, permitting the family the time to savor and delight in every cherished moment with her. The family is so grateful for the care and constant love shown to Joan from these women and men since the summer of 2020 up until her passing.

We lost a loving, genuine, beautiful soul on January 23, 2022, when Joan Elizabeth (Wise) Marangio died peacefully and passed to the arms of Our Lord and His Mother. Born in 1930 in Minneapolis, Minnesota, the daughter... View Obituary & Service Information

The family of Joan Elizabeth Marangio created this Life Tributes page to make it easy to share your memories.

Send flowers to the Marangio family.