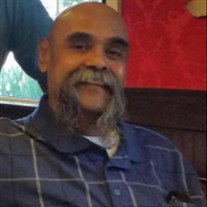 Joseph Anthony Bernal, aged 68, passed away on May 24, 2021, in Riverside, California. Joseph is survived by his brother Eddie, his loving wife of 46 years, Juana, and his three children, Joseph Jr, America, Veronica, and his 5 grandchildren, Joseph III, Jayden, Antonio, America, and George. Joseph, or Joe, as he was known to his friends and family, was born January 27, 1953, in San Fernando, California to Rafaela and Antonio Bernal, being the youngest of 3 children. Growing up, Joe enjoyed being a Boy Scout, the outdoors, and working with his father at the meat market. Joe went to San Fernando High School and excelled at academics as well as football. After graduating, Joe Joined the U.S. Army, where he served in the European Theatre of Operation with the 509th Special Forces Group until his honorable discharge in 1974. In 1974, he married his sweetheart Juana, and in their union of 46 years were the proud parents of 3 wonderful children, and 5 exceptional grandchildren. He worked tirelessly to ensure his family had everything they needed. Joe was a caring and thoughtful human being, was an American Patriot, and a wonderful husband, father, grandfather, and friend. Joe and Juana resided in Riverside, California until his passing on May 24, 2021. He will be forever missed by his family, his friends, and all those who had the good fortune of having met him. Viewing will be held at Arlington Mortuary 9645 Magnolia Avenue, Riverside California 92503 on June 9, from 4pm, to 8pm. Mass will be held on June 10 at Santa Rosa Catholic Church 668 S. Workman Street San Fernando, California 91340 at 10 am. Burial will be held directly after Mass at 11:30, at San Fernando Mission Cemetery 11160 Stranwood Avenue Mission Hills, California 91345

Joseph Anthony Bernal, aged 68, passed away on May 24, 2021, in Riverside, California. Joseph is survived by his brother Eddie, his loving wife of 46 years, Juana, and his three children, Joseph Jr, America, Veronica, and his 5 grandchildren,... View Obituary & Service Information

The family of Joseph Anthony Bernal created this Life Tributes page to make it easy to share your memories.

Send flowers to the Bernal family.