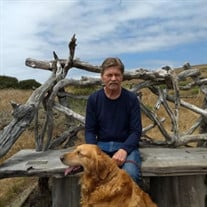 Kenneth Marlow Hendrickson affectionately known as “Babe” by his family, age 75, passed away on December 12, 2020, in Moreno Valley, CA. Kenneth was born in Taopi, MN to Kenneth and Nevelyn Hendrickson on May 18, 1945. Kenneth grew up in Mason City, IA, and at the age of 17 enlisted in the Marine Corps. After a tour of duty in Vietnam his enlistment was extended two months and 21 days. He served from 1962 to 1966 and was awarded the National Defense Service Medal, Vietnamese Service Medal, and Good Conduct Medal. He also earned a Rifle Marksmanship Badge M14. Kenneth earned the rank of Corporal on May 1, 1966. After serving in the military Kenneth settled in Southern California. He worked as a maintenance mechanic for Shasta Beverages for over 40 years. Ken enjoyed going on family outings with his family hiking and spending time with his daughter Candace (Jason) Fournier and two grandchildren Camden and Jackson. Ken also loved driving his beloved golden retriever “Jessie” to the park every day. He is preceded in death by his first wife Barbara “Bobbie,” his parents Kenneth and Nevelyn, sister Cindy Shinn, brothers-in-law Lee Dittberner, Fred Fistler and David Shinn, niece Christie Huebner and nephew Justin Hendrickson. He is survived by his wife Cindy of Moreno Valley, CA, only child Candace (Jason) Fournier, grandsons Camden and Jackson all of Moreno Valley, CA, brothers Gary (Nancy), Robert “Bob” (Kathy), and Kevin (Renee) and sisters Judy Dittberner, Nancy (Ron) Worley, and Debbie (Lon) Helmer all of Mason City, IA, and many nieces and nephews. Burial will be at Riverside National Cemetery with honors on January 11, 2021, at 10 a.m.

Kenneth Marlow Hendrickson affectionately known as &#8220;Babe&#8221; by his family, age 75, passed away on December 12, 2020, in Moreno Valley, CA. Kenneth was born in Taopi, MN to Kenneth and Nevelyn Hendrickson on May 18, 1945. Kenneth grew... View Obituary & Service Information

The family of Kenneth M. Hendrickson created this Life Tributes page to make it easy to share your memories.

Send flowers to the Hendrickson family.