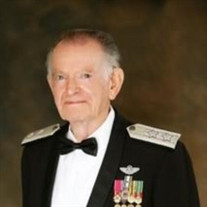 Major General Henry B. Stelling Jr. (Hank), West Point Class of 1948, died September 20, 2021, at home in Costa Mesa, California at age 97. His wife of 67 years, Lucille Treat Stelling who died September 14, 2016, was the bedrock of the family and key to his longevity. When infirmities of age took her health, his loving care for her was Hank’s finest moment. He died a young man in an old man’s body. His mind was sharp; his positivity and optimism about life especially his upcoming 75th West Point reunion in 2023 endeared himself to all including the medical team who worked valiantly to save him. The Good Lord took him home sooner than expected, but not before he was able to visit with his family and friends all the way down to his great grandchildren. General Stelling touched many lives making new friends to the end. His West Point yearbook, The Howitzer 1948, foretold the man Hank would become; “When things start going badly, all his friends look to Hank to come through, proud to say, “he’s a friend of mine.” He loved to entertain family and friends. Golfer, bridge player, swimmer, computer wizard making custom cards for all occasions with carefully chosen uplifting messages. Truly a thoughtful man. General Stelling was born in South San Francisco July 9, 1924, the eldest of two brothers of Henry B. Sr. and Ruth Y. Stelling. Survivors include four children and spouses: Henry B. III and Darlene, Sandra S. Caffey and Glen, Mark C. and Amy, Sharon S. Qualls and Gary. Six grandchildren and spouses: Robert H. Stelling (USAFA ’03) and Ali, Lisa Caffey Bash and Kristopher, Steven C. Stelling and Alli, Jeff A. Caffey and Breeauna, Ann Stelling Henderson and Steve, and Julia Qualls. Six great grandchildren: Charlie and Ruby Caffey, Jack and Max Stelling, Stevie Bash, and Dylan Henderson. His 32-year military career spanned atomic weapons electronic assembly; SAC navigator/bombardier; pioneer in space reconnaissance; Pentagon advocate for the Space Shuttle and GPS; and airborne electronics systems R&D. Graduating high school in 1942, he attended the School of Engineering at UC Berkeley. In 1943, he was called for active duty to the Armored Command, Ft. Knox, KY. While in the Army he received a congressional appointment to the U.S. Military Academy with a start dJune 1944. He graduated June 1948 and was commissioned a second lieutenant in the U.S. Air Force. When eliminated from flying training in 1949, he entered the atomic weapons field with assignments to the Nuclear Weapons School in Biloxi, MS, the Armed Forces Special Weapons Project at Sandia Base, NM, and the Directorate of Special Weapons at Langley AFB, VA. At Langley AFB, he was cited for developing and testing an organizational concept for tactical atomic support activities resulting in significant reductions of personnel and equipment required for theater operations. General Stelling entered basic navigation training in June 1954 at Ellington AFB, TX. He was later assigned to the 384th Bombardment Wing of the Strategic Air Command (SAC) at Little Rock AFB, AR. His B-47 flight crew won the 1957 annual SAC bombing and navigation competition against other B-47, B-36 and B-52 wings including Valiant and Vulcan crews from the UK. This competition was one of his most memorable achievements. “On our three missions, flying at 30,000 feet our bomb runs averaged 250 feet from target calculated by ground radar”, recalled General Stelling. He was awarded the Distinguished Flying Cross. General Stelling was a Cold War warrior; proud of his role helping to prevent tensions escalating to hot wars and the potential for mutual assured destruction. After completing the Armed Forces Staff College in 1962, he was assigned to the National Reconnaissance Organization’s (NRO) Special Project Office at the Space Systems Division in Los Angeles. From 1962-72, General Stelling held several positions developing and launching reconnaissance satellites. In between assignments, he earned an MBA from USC; an MS in International Affairs at George Washington University while attending the National War College. In 1972, he was assigned to the Pentagon as Director of Space for Air Force Programs and DoD representative for the NASA Space Shuttle. He obtained DoD acquisition approval and congressional funding for the Global Positioning System (GPS). Col. Brad Parkinson, GPS program manager, gave General Stelling credit for coining the name “Global Positioning System” to recognize the many ways GPS technology could be applied beyond navigation. In 1976, he assumed the Vice Commander position at the Electronic Systems Division, Hanscom AFB, MA, retiring in 1980. From 1980 to 1991, he worked for Rockwell International Defense Operations in Anaheim, California as Vice President of Business Development and Programs; Director of the Advanced Development (Gallium Arsenide Integrated Circuit applications); and finally as Corporate VP of Security. After retiring, General Stelling and his wife enjoyed traveling, playing golf and bridge, attending USMA reunions, and hosting family gatherings. He was also the moderator of the West Point Forum Class of 1948. Military decorations and awards include the Distinguished Service Medal with oak leaf cluster, Legion of Merit, Distinguished Flying Cross, Air Medal, Air Force Commendation Medal with three oak leaf clusters, Army Commendation Medal, and the Air Force Outstanding Unit Award ribbon. General Stelling loved his wife, his family, his friends, West Point and his country! He lived the values of Duty, Honor and Country. Grip hands! General Stelling will be interred at Riverside National Cemetery Monday, October 25, 2021 at 10:45 AM next to his beloved wife.

The family of Maj. Gen Henry Barthold Stelling Jr. created this Life Tributes page to make it easy to share your memories.

Send flowers to the Stelling family.