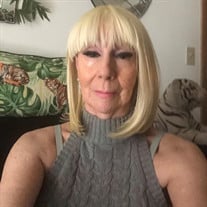 In Loving Memory of Margaret E. Walker August 29,1949 to August 3, 2021 Margaret "Peggy" Ellen (Soyster) Walker, age 71, of Riverside, California, passed away due to complications from a massive stroke, stage 4 Liver and stage 4 pancreatic cancer on August 3, 2021in her home. She is the wife of John L. Walker, age 73. They were Married for 28 Loving years. Born in Joilet, Illinois, she was the daughter of the late Richard and Jane (Rogers) Soyster. She is survived by her Sisters Louise (Soyster) Meriwether, and Jeanie Ault, also her four children, Tondra (Freeman) Stucks, Jack Freeman, Bonnie Minnis,and Robin (King) Templeton II. In addition, her Grandchildren Felicia Stucks, Kellan Freeman, Geoffrey Templeton II, Abigail Templeton, and Shane Minnis. Mrs Walker is a Graduate of the California School for the Deaf, (CSDR) in Riverside, California. She was employed as a Beautician in Orange County, California. Her wishes were to be Cremated and buried with her husband and will be interned at the Riverside Veterans National Cemetery here in Riverside,California.

The family of Margaret E. Walker created this Life Tributes page to make it easy to share your memories.

Send flowers to the Walker family.