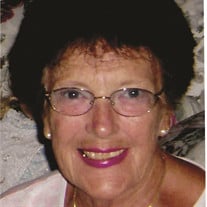 Margaret Ann (Grummitt) Waterland, 89, passed away on March 17, 2022 in her home in Riverside, CA. Born on November 30, 1932 to William and Ethel Grummitt of Chicago, IL, she had two younger brothers whom she adored. Margaret (Meg) spent many of her “growing- up” years in dance classes with the Morgan Dance Company in Chicago. Her love of music, dancing, old movies, and musicals, lasted throughout her life. Meg graduated from Hirsch High School in Chicago in 1951, and then attended Chicago Wesley Memorial Hospital School of Nursing at Northwestern University, graduating with an RN degree in 1954. After graduating, Margaret hopped in her car and bravely drove straight to the place of her dreams, CALIFORNIA. Margaret landed in San Francisco, her favorite city. While there, she met LeeRoy (Lee) Waterland, who was stationed at the Presidio while in the army reserve, following his service in the Korean War. Meg and Lee married in Chicago, at Bryn Mawr Community Church on January 14, 1956. They lived in a variety of places in California, Montana, and Illinois, having 5 children along the way. Meg earned her BSN while she and Lee attended Montana State University, both graduating in 1961. Meg worked as an RN at Ingalls Memorial Hospital in the pediatric ward in Harvey, IL, Peotone Bensenville Home, was a campus nurse in a home for children with special needs, and taught as an adjunct instructor at Kankakee Community College. Work and the children kept Meg and Lee very busy until they could return to California, when Lee got a job there in 1977. Meg and Lee spent the next 16 years in Riverside CA, Margaret worked as a school nurse in Riverside, a school audiometrist, an OB/GYN nurse and nursing supervisor for Riverside County General Hospital. Margaret was a caring, compassionate, and skilled nurse and met many dear friends during her long career. Following LeeRoy’s death in 1993 and her subsequent retirement in 1997, Meg moved to Palm Desert. There she soaked up the sun at the pool, traveled a lot (favorite destinations like Hawaii, Sedona, and San Francisco), took tap dancing classes, and enjoyed visiting with her grandchildren, which was one of the activities she enjoyed most in life. Margaret took up card making and until only a few months before her death, sent hundreds of homemade cards to friends and family. Margaret was an adventurous, determined, and compassionate woman who was always kind and loving. She was a wonderful wife, mother and grandmother. She enjoyed sewing, making jewelry and dolls, as well as oil painting. Her paintings were among her prized accomplishments and her home was filled with wonderful paintings that she had done of Sedona, Hawaii, Monterey, and various other beautiful places and things. Margaret is preceded in death by her husband, LeeRoy (1993), her father, William “Jack”, her mother, Ethel, her brother, Dennis, and son-in-law, Jeffrey Tomberlin. Survivors include, five children; Lisa Tomberlin (Pete Slagel) of McFarland, WI, Michael (Kimberly) Waterland of New Lenox, IL. Cynthia Grubbs Mahood (Donald Mahood) of Peotone, IL, David Waterland of Riverside, CA and Steven Waterland of Riverside, CA; her brother David (Janet) and Sister-in-law, Carolyn; 13 Grandchildren, Luke (Alyssum) Tomberlin, Jessica (Youngwan) Kim, Meghan (Josh) Gross, Brandon Waterland, Nick Waterland, Matthew Grubbs, Bethany (Steven) Shaffer, Garrett Grubbs, Trevor Mahood, Chandler Mahood, Katherine Waterland, Mitchell Waterland, and Jack Waterland; 14 wonderful great-grandchildren, many loving sisters-in-law and brothers-in-law, dear nieces and nephews, great- nieces and great- nephews and cousins, beloved friends and co-workers. She touched many lives! The celebration of life service and luncheon will be held at Sunkist Center at the Citrus Historic State Park on April 25, at 11:00 AM. Burial will be at 10:00 am at Riverside National Cemetery. In lieu of flowers, the family requests donations be made to St. Jude’s Children’s Foundation, which was one of Meg’s favorite charities. The family is very grateful for the loving care of the employees of Sunrise at Canyon Crest in Riverside, CA where she last resided. #MargaretWaterlandRiversideCalifornia

Margaret Ann (Grummitt) Waterland, 89, passed away on March 17, 2022 in her home in Riverside, CA. Born on November 30, 1932 to William and Ethel Grummitt of Chicago, IL, she had two younger brothers whom she adored. Margaret (Meg) spent many... View Obituary & Service Information

The family of Margaret Ann Waterland created this Life Tributes page to make it easy to share your memories.

Send flowers to the Waterland family.