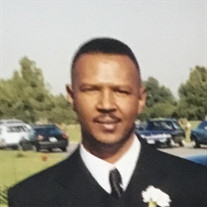 Michael Jackson was born December 28, 1962 at Lincoln Hospital in Bronx, New York. He was the 7th of 8 children born to Charlie L. Jackson and Lois S. Jackson originally from Spartanburg S.C. The family moved from New York City in 1967 to Los Angeles California where Michael received his early education. He was proficient and certified in Electronic Engineering, Computer Technology and ASE (automotive service). Michael was intelligent, creative and loved working on computers or fixing your car. He was charming, soft spoken, blessed with a beautiful smile and good looks that he passed on to his children and grandchildren. Michael was the father of four. A son Mykel and 3 beautiful daughters. Joi, Candace and Kelley. He adored his children! Michael will unite with his son Mykel who awaits him in heaven, along with his father Charlie Jackson Sr, and his Brothers Charlie Jackson Jr. and Marvin Jackson. Michael was strong and hopeful! With his mother by his side, He endured and overcame a long illness with cancer through February 2020, but was informed in December 2020 that the cancer had returned and was inoperable. He stayed strong for his Mother and his children. He was strong but he was not afraid! Michael will reunite in heaven with his son Mykel, his Father and brothers , Doris and Rankins and our ancestors that arrived before him. Michael leaves to cherish his memory his mother Lois Jackson, daughters Joi, Candace and Kelly, siblings Brenda Jackson, Oliver Hunt, Gloria Neely, Robin Graves, Barbara Carpenter, and Allen Jackson.. Michael had 9 grandchildren, Mykel Jr. Charlie J., Aubrey, Tia. ,Cecilia, Mia, Liam, Sofia, and Levi, and a host of nieces , nephews, uncles, aunts and cousins . Michael departed this life on Friday, February 19, 2021 at 7:41am with his daughters at his side.

Michael Jackson was born December 28, 1962 at Lincoln Hospital in Bronx, New York. He was the 7th of 8 children born to Charlie L. Jackson and Lois S. Jackson originally from Spartanburg S.C. The family moved from New York City in 1967 to... View Obituary & Service Information

The family of Michael Jackson created this Life Tributes page to make it easy to share your memories.

Send flowers to the Jackson family.