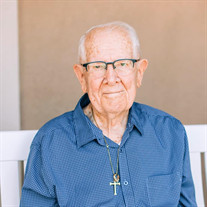 Milan Frances Wagner was born on September 20, 1928, in Tilden, Nebraska, and peacefully entered Heaven's gates on February 26, 2022, surrounded by his children, grandchildren, and great grandchildren. Milan had a strong faith in our Lord Jesus Christ which filled his life and he instilled it in his family. We find comfort knowing he is celebrating in Heaven and reunited with his wife. Milan will always be remembered for his faith, honor, love, devotion to his family and friends, his smile, grandpa jokes, stern words when needed, life lessons he shared and his creative mind. He was a true man of love and integrity and strived to show the love of Christ.Throughout his life these characteristics shined. As a man of God, he spent his life cultivating a closer relationship to Jesus Christ through spending time in prayer, reading his bible, listening to sermons, and always took the opportunity in sharing God’s love, forgiveness and salvation in Jesus Christ. He believed his life was a reflection of his heart for Christ. After his wife passed he wore Jean’s wedding ring on a cross. When people commented on it, he always took the opportunity to share the gospel. Milan proudly served in the United States Army in the Korean War. He believed in his country and all the opportunities that it afforded him. Upon his honorable discharge from his military service he returned to the family business, Wagner Electric. In September, 1955, Milan called Jean for a date that would forever change his life. After their only dinner date, Milan knew she was the one he wanted to marry; they set out for Vegas with his sister and her husband as their witnesses. They were married on September 21, 1955. Milan and Jean had three children: Marti, Fred, and Danny. Milan loved his family unconditionally. He demonstrated his love through his devotion to his wife, as she would come up with grand ideas and Milan would always execute it with a happy heart. Whether it was writing a poem for the box game, wearing a shirt with your face on it or dressing up to match the theme of the party. Milan found joy in the time he was surrounded by family and found a new lease on life through his interactions with his great grandchildren and his daily talks with loved ones. Milan’s passion for learning evolved throughout his life whether it be through electrical work, inventing tools, graphic art, creating children’s board games, or creating stories. Milan and Jean were fortunate to start Wagner Graphics where Milan was able to utilize and foster his love for graphic design, inventing and creating games. He spent countless hours throughout his lifetime creating and playing his games with his children, grandchildren and great grandchildren. This passion followed him into his retirement where he continued to perfect his games. Upon Jean's death in 2019, Milan moved in with his daughter and son-in-law. Daily Milan expressed his gratitude to his daughter for letting him live with her and for taking such good care of him. While living with his daughter and son in law Milan was continually surrounded by love, laughter, and found a tremendous amount of joy spending time playing with his great-grandchildren. Our family will continually celebrate the legacy he left behind. It is through his Godly example that we know he will forever be in our heart’s. We are who we are because of his love and Godly example. We are at peace knowing he is with our Lord and Savior and reunited with his loving wife Jean. We will all hold tight and cherish all of the good times we had together. Milan is survived by his brother Delaine P. Wagner; his children: Marti Wagner Rojas (Bill), Fred Wagner and Danny Wagner (Kerri); his grandchildren: Jesse, Shaun, Kristen, Elissa, Joshua, Randy, Jonathan and Lauren; his great grandchildren: Jenny, Michelle, Elijah, Sherilynn, Kennedi, Nathan, Timmy, William, McKinley, Jonathan, Ellie, Nixon and Annabella. He was preceded in death by his lovely wife Jean, his parents Paul and Cleonice Wagner, and his sister Geraldine Pruitt (Wagner), “It may be hard now but in a while you’ll only remember the good.” - Paul Wagner

Milan Frances Wagner was born on September 20, 1928, in Tilden, Nebraska, and peacefully entered Heaven's gates on February 26, 2022, surrounded by his children, grandchildren, and great grandchildren. Milan had a strong faith in our Lord Jesus... View Obituary & Service Information

The family of Milan Francis Wagner created this Life Tributes page to make it easy to share your memories.

Send flowers to the Wagner family.