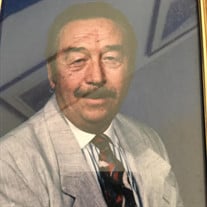 Richard Clinton Graybill Richard Clinton Graybill, a 44 year resident of Redlands, Was born in Roanoke, VA on January 2, 1929 to Elmer Graybill and Mabel Moses Graybill. For about 17 years he was the only child and grandchild in the family . His father was in the Navy and the family lived in many places, but the considered Roanoke to be their home. He died September 12, 2021 at Loma Linda University Hospital. After graduating high school in Warwick, Rhode Island he joined the Navy as a Radio man. When Rich left the Navy he attended Wentworth institute of Technology an worked at Pratt & Whitney Aircraft in Boston, MA. Richard was predeceased by both parents, Elmer and Mable Moses Graybill; his younger brother Michael, a son Richard Jr. and granddaughter Lisa Benjamin. Like most of his family, Rich returned to Virginia, where he had a career in real state sales. He sold life insurance for Life of Virginia upon returning to Roanoke. He always had an interest in acting and participating in Community Theatre in both Richmond and Roanoke. In Richmond he starred IN “The Treehouse of the August Moon” his favorite production; he also worked at the Mill Creek Playhouse in Roanoke. He was a Life member of both the Masonic Lodge #53 in Richmond, VA to Redlands, having some cash but no jobs nor living quarters arriving August 5, 1977. Rich enjoyed the warm winters in Southern California. After one year the couple purchased their first CA home. About one year ago he became one of the first male members of the Contemporary Club in Redlands. Prior to becoming a Contemporary Club member he supported the JR. Women of the Contemporary Club for many years; he was Santa in the Redlands Christmas Parade Representing the Jr. Women. He loved to dance, but his wife Cheryl, did not- Rich and Sharon Skyberg were a great couple on the dance floor! He is survived by his wife Cheryl Dye Graybill, son Gary Graybill, Of Vacaville, CA daughter Gina Richards of Roanoke, VA, granddaughters Nicole Roberts of Washington, Ashley Cavendish of Roanoke, VA, sister and brother-in-law Kathy Dye and husband Daniel Krisky of Boca Raton, Florida and the cat Zoula Mae. Richard was a horse lover! One of his passions was visiting Clairborne farm in Lexington, KY at the end of December for many years. He saw Secretariat run at Arlington Park, IL and spent many hours with the great horse. Most of his and Cheryls vacations were centered around horse farms and race tracks, with his favorite track being located In Charles Town, WVA. The last few months of his life was spent watching TVG. Another passion was ALF, a television show from the late 80’s. On the program ALF was always looking for his girlfriend Rhonda. Cheryl located another stuffed animal and named her Rhonda Sue. Alf carries a backpack and Rhonda was her purse. Each of them have a bed (Alf’s was handmade by Rich). The children were put to bed each night and traveled with the couple. On day at West Point Military Academy ALF will not sit up straight for his photo; a four star general came by and ordered Alf to sit up straight- he did and Rich was able to get the picture. A memorial service will be conducted Saturday, October 23, 2021 at 2:00 p.m. at the Contemporary club, 173 S. Eureka St. in Redlands, Ca. Please wear red, Rich’s favorite color! Interment will be private at Riverside National Cemetery. In lieu of flowers, the family request donations be made to Redlands Family Services 612 Lawton St. Redlands, Ca 92374 or Masonic Lodge #53 located at 53 Masonic Ln. Richmond, VA 23223

The family of Richard Clinton Graybill created this Life Tributes page to make it easy to share your memories.

Send flowers to the Graybill family.