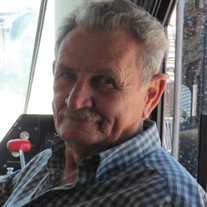 Richard Carl Whitney was born in St. Louis, Missouri, the third of four children and the only son. He was very devoted to his parents and his three sisters and enjoyed stopping by for a cup of coffee and visit with them whenever he could. In his early childhood he lived mostly in St. Louis, but lived on a farm outside St. Louis for a time as well. He had memories of sitting around a wood-burning stove while on the farm and listening to radio dramas (“Only the Shadow Knows …”; his favorite) and of playing along the Mississippi River with his dog Blackie while living in St. Louis. At the age of 9 or 10 he and his father came to California. His dad was looking for work with the hope of relocating the rest of the family to the west coast. They worked together, picking fruit, doing other farm work and camping in empty fields at night until grandpa learned that Kaiser Steel was hiring. Grandpa began working at Kaiser and brought grandma and the girls to California and a new chapter in their lives began. Dad grew up in Colton, and had a wide circle of friends who remained faithful and connected to one another all their lives. They had many adventures, hitch-hiking to Laguna Beach, exploring the hot springs near the Arrowhead Springs Hotel, and swimming in the Santa Ana River to name a few. He worked at the dairy near the now-drained Urbita Lake near Orange Show Road and E Street. He married Betty Lou Ragsdale in 1950 and they had two children, Scheryl (Sherri) and Richard (Rick). He served faithfully as a tank driver in Okinawa during the Korean War. After his military service he had many odd jobs, working at 7-Up, Portland Cement, and Hanford Foundry. He was offered a job at both Kaiser Steel and Norton Air Force Base and finally settled on Kaiser Steel. He worked as a millwright for 30 years, keeping the great blast furnace functioning so that steel could be made. He learned how mixing different chemicals and substances would produce different grades of steel. After Kaiser closed its doors he worked another eight years at the mill for California Steel. Dad was multi-talented and could fix or make just about any type of machinery, was a great carpenter, electrician, welder, plumber, draftsman and inventor. He designed some of the machinery that Kaiser Steel used to help curb air pollution in response to EPA requirements. He had projects he was working on up until the last few weeks of his life and, in fact, our last outing was to Home Depot! He always had a project in progress. Dad was of the mind that if you could fix something, fix it rather than discarding it and replacing it with something new. He made beautiful model train layouts, creating buildings, roads, scenery and tunnels from scraps around his garage. He made a motor home from an old school bus before motor homes were popular. He traveled all around the U.S. and his favorite place was Carlsbad Caverns in New Mexico. In addition to his childhood friends, he had many buddies and pals from Kaiser with whom he played golf and went on camping trips. He was a wonderful and fun father, grandfather and great-grandfather. He enjoyed time with the family, watching Nascar and football and going to high school football games. He was always looking for fun things to do! Over the years, we had passes to Universal Studios, the LA Zoo, Knott’s Berry Farm and Disneyland. He seldom missed an outing to those destinations. The great-grandchildren frequently talk about roller-coaster riding with their great-grandfather! So many happy memories. Beyond all his talents and accomplishments, he was a man of honor and integrity and someone we could all look up to and have faith in. He will be sorely missed!

Richard Carl Whitney was born in St. Louis, Missouri, the third of four children and the only son. He was very devoted to his parents and his three sisters and enjoyed stopping by for a cup of coffee and visit with them whenever he could.... View Obituary & Service Information

The family of Richard Carl Whitney created this Life Tributes page to make it easy to share your memories.

Send flowers to the Whitney family.