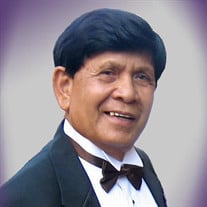 Teodorico (Doy) Daza Mercado Born: March March 19, 1935 Kawit, Cavite, Philippines Died: August 6, 2021 Redlands, California, USA Son of Jose and Olivia Mercado and 5th of 11 siblings Father of Dominic, Teodorico Jr.(deceased) and Theodore Married to Beulah Mercado 1960 - 1992 Married to Lerma Mercado 2003 - 2021 During the Korean War in 1951, Teodorico joined the US Navy as part of the program to recruit Filipinos. His tours included being part of the Cuban Missile Crisis blockade, serving in Vietnam and serving on the USS San Bernardino. Through his time, he worked his way up the ranks to Chief Petty Officer as a chef in the Navy. He did so well, that the USNavy wanted him to stay on and work with in the submarine naval base in Connecticut. He declined and in 1975 retired from Lakehurst Navel Air Base in New Jersey. After his service of the Navy, he tried has hand on a few things. He was a postal delivery person, an aid at a local mental institution, and an assistant for the county coroner. He settled on opening a road-side diner that featured Chinese food in Big Springs, Texas. His adventures brought him to San Bernardino’s Inland Empire where he was near his brothers and sisters. For the last 40 years, he lived-in the Redlands area. Early during his time, he provided meals for students, staff and patients at Loma Linda University and Loma Linda University Medical Center. After cooking his last meals to others, he took up ballroom dancing. He learned how to dance various classic styles including the Salsa, and Tango. He added to his skills by being a dance instructor and a well respected party DJ in the Los Angeles area, San Diego and Las Vegas. He remained active through the summer of 2021. Sadly, his adventures came to a quick end on August 6, 2021. The viewing and memorial service will be held at the Arlington Mortuary in Riverside at 10am on Tuesday, September 7. On the same day, the military committal service will be held at 1pm at the Riverside National Cemetery.

The family of Teodorico Daza Mercado created this Life Tributes page to make it easy to share your memories.

Send flowers to the Mercado family.