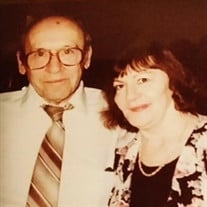 William Lunsford (Bill) Tittle 08/27/1928 - 07/10/2010 Sarah Annette (Sally) Tittle 01/25/1931 - 01/24/2022 Bill was born August 27, 1928 in Dayton Ohio to William H. Tittle and Aurora Beryl Tittle. Bill was 1 of 6 boys. Bill graduated High School and went on to proudly serve in the US Army as a medical technician with the 382NF Station Hospital in Korea. Bill enjoyed going camping, fishing and loved baseball. Bill passed away on July 10, 2010 at the age of 81. Sally was born January 25, 1931, in Springfield Ohio to Dr. Robert Anderson and Lucille Anderson. Sally was 1 of 5 children. Sally graduated from Springfield High School. Sally enjoyed the arts, music and theater. Sally played the piano and was an avid painter. She was fond of animals, loved nature, the beach and horses. Sally passed away on January 24, 2022 at the age of 91. Bill and Sally met on a blind date and soon fell in love. In 1949 they would marry. They would relocate to California a few years later where they started their new life together. Bill began his 35-year career in civil service for the U.S. Airforce. In 1955 they would start their family by adopting and raising 5 children. Sally was a stay-at-home mom and would later start her career in retail as a manager for the Broadway that later became Macy’s. Her successful career would last 35 years. Some of the many things Bill and Sally enjoyed were nice restaurants, traveling and visiting casinos. They were very active with their children as they grew up, going on many vacations. Bill coached his sons Little League baseball teams and was their Indian Guide Leader. Bill and Sally were always present at the children’s activities. Bill and Sally were loving and devoted parents and always put their children first. Bill and Sally are survived by 1 sibling Tommy Tittle, 5 children: Cynthia, Robert, Marsha, James and MaryAnn. 7 Grandchildren and 8 Great Grandchildren. Services are being held on April 27, 2022 at 11:00 am at the Riverside National Cemetery Riverside National Cemetery 22495 Van Buren Blvd. Riverside Ca, 92518

The family of William & Sally Tittle created this Life Tributes page to make it easy to share your memories.

Send flowers to the Tittle family.